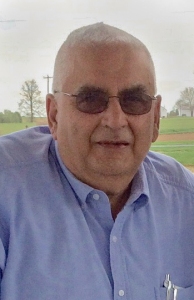 Bernard Palmeri went to be with The Lord on Saturday, June 1, 2019, at the Quarryville Presbyterian Retirement Community where he has resided since November of 2016. He and his wife, Linda (Dierking) Palmeri, celebrated 54 years of marriage on May 1.

Bernie was born in Brooklyn, NY, the only son of Salvatore and (Anna Fanelli). In addition to his wife, Linda, he is survived by two sons, Mark (Val Nace) and Jeffrey (Amy Strausner) and a grandson, Matthew.

Bernie and his family moved from Staten Island to Ronks, PA in 1972.
Bernie was a faithful member of Marticville United Methodist Church. His greatest enjoyments – church affiliation, family, friends, neighbors and anybody he met.

There will be a Celebration of Bernie’s Life at 11:00 AM on Tuesday, June 4, 2019 (TOMORROW) in the Ellingsworth Auditorium at QPRC, 675 Robert Fulton Highway, Quarryville, PA with Chaplain Lawrence C. Roff officiating. The family will greet friends from 10:30 AM until the time of the service.  Interment is Private.